Michael John Smith, a Captain in the United States Navy, was born on April 30, 1945 in Beaufort, North Carolina. He enjoyed woodworking, running, tennis, and squash. He was assigned as Pilot for STS 61-N scheduled for launch in the Fall of 1986.

Interred at Arlington National Cemetery: May 3, 1986 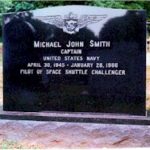 << Back to Astronauts at Arlington National Cemetery