Recently I started writing out the introductions and conclusions to my presentations. As I prepared for my scheduled August 15 presentation on Wiley Post at the Will Rogers Memorial Museum in Claremore, Oklahoma, I re-read favorite books, wrote some portions of my remarks, edited and arranged my slides, and simply contemplated his life story. I knew that the final part of my preparation would be visiting Oklahoma for the first time in the days leading up to my talk, so I left plenty of time in my schedule to enjoy myself. My introduction was pretty much set a few days before my plane took off. 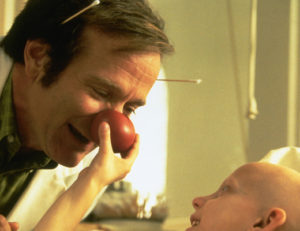 And then Robin Williams died.

It was a sucker punch to the gut, a brick wall of sadness and loss that I had felt before with the sudden deaths of people such as Jim Henson, Tim Russert, and Christa McAuliffe.

While comforted by the collective outpouring of grief from many people, including my friends on Facebook, it was incredibly sad to realize that we have received all that we ever will from the brilliant creative spirit of a man that I first remember as Mork.

Robin Williams, like Will Rogers before him, left a body of work that will be enjoyed for years to come. Both Williams and Rogers left films completed and still in the can, shared stories that made us laugh until our sides hurt, and made reflective and serious observations about life and living. 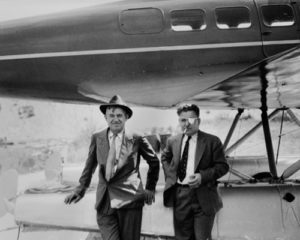 When Robin Williams died, I understood in a more personal way how the sudden deaths of Will Rogers and Wiley Post in a plane crash on August 15, 1935 affected this country so deeply.

Will Rogers died before I was born, and before my parents were born, but my grandparents could listen to him on the radio, see him on the movie screen, and read his newspaper columns. Today he would be on Twitter and Facebook and probably still observe that, “Why they call it traffic when it ceases to move I do not know.”

In his recent autobiography, “Harold,” Hal Holbrook said, “You go down the road your gut tells you to travel.”

That quote explains very simply what has resonated with me about Will Rogers and Wiley Post during more than 20 years of study – they each followed their own unique course through life and they were aware of, and used for the benefit of all of us, their strengths and abilities.

A number of years ago I visited the final home of Will Rogers, which is a state park in California. The house where he was born in 1879 is preserved on a living history ranch in Oologah, Oklahoma where peacocks, donkeys, and goats wander the grounds with giggling children and reflective adults. The Will Rogers Memorial Museum in Claremore preserves and shares artifacts from his life and his story for future generations. It is also the final resting place for Will, his wife Betty, their children and descendants.

The place where Wiley Post was born in 1898 near Grand Saline, Texas is just a field now, and the house where he was living at the time of his death was torn down for progress. But all around Oklahoma, from his grave in Oklahoma City where a monument stands nearby, to an airport named for him, to a replica of his airplane, the Winnie Mae, which hangs in the Oklahoma History Center, the honors exist.

For a number of years I have happily taken on a personal mission of sharing the story of both Will Rogers and Wiley Post – humbly being their messenger to keep their stories alive. Visiting the Will Rogers Memorial Museum for the first time this month was a very moving experience. Driving up the hill to the museum, sitting at the family tomb in the sunken gardens, and rubbing the toes of Will’s statue for luck as thousands of people have before me, are moments that I will not forget. 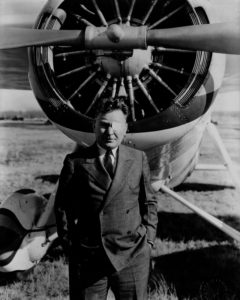 As I shared during my August 15 presentation at the museum, I have been inspired by the many facets of the life of Wiley Post. Wiley was a mechanical genius who also spent time in the state reformatory for highway robbery as a young man. Just ten years later he flew around the world in 8 days, 16 hours with Harold Gatty navigating their course in the Winnie Mae. Within four years of that achievement he was first person to fly around the world solo, soared to more than 50,000 feet while wearing the world’s first pressure suit that he designed, and discovered the jet stream. Like me he moved around a lot as a kid, yet eventually counted people such as Amelia Earhart, Roscoe Turner, and of course Will Rogers, among his friends.

While sitting in the Will Rogers Theatre at the museum before my presentation on August 15, I thought of Will Rogers’ way of connecting with an audience and how much I have learned from the words that he left us.

I also thought of my Dad—a member of his high school debate team, storyteller, canoe and kayak enthusiast, natural salesman and woodworker who has passed many gifts on to me and who still inspires me with his love of life.

As I stepped onto the stage to speak, I wore a jacket that belonged to my wife’s father, Paul Draper, who I regrettably never met—a typewriter salesman and storyteller who loved to coach kids in soccer and was among the Allied forces that liberated Dachau in the closing days of World War II and served as an MP at the Nuremberg Trials.

I realized in those moments that I am their messenger too, and that they were all with me in spirit.

My visit to Oklahoma was a wonderful experience, even more special because I shared my visit with the people that I met. From the waitress at a restaurant in Oologah where I enjoyed a bowl of chili, to the staff and docents at the Will Rogers Memorial Museum, to the tour guide at the Cherokee Heritage Center’s Diligwa village in Talequah, everyone that I met helped me to understand why people sing about Oklahoma and its hills and open sky. In the words of one of the members of the Will Rogers family that I met, “People that are from here sometimes go away for a while, but then they come back.” I look forward to my next visit.

With a statue of Will Rogers in Claremore, Oklahoma