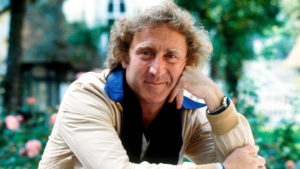 Gene Wilder died yesterday, and my Facebook feed rapidly filled with remembrances. I was certainly sad, because he made me, and countless others, so happy.

I’ve been thinking about Wilder’s films, and his acting performances. Among my favorites is, “Silver Steak,” a 1976 film about murder, romance and intrigue on a long distance train trip. In the film, Wilder’s first pairing with Richard Pryor, he keeps getting thrown off the train. And there was a memorable scene in a biplane. If you haven’t seen it, check it out. It’s a riot.

In my view what made Gene Wilder unique was not the strength that he brought out in his characters, but rather their flaws and weaknesses. Whether it was his dependence on a blue blanket in, “The Producers,” his drinking problem in, “Blazing Saddles,” or his pure eccentricity in, “Young Frankenstein,” his struggles were in plain view. And in each case, his characters overcame obstacles to move forward.

Dr. Frankenstein, to the monster: “Hello, handsome! You’re a good-looking fellow, do you know that? People laugh at you, people hate you, but why do they hate you? Because… they are jealous! Look at that boyish face. Look at that sweet smile…”

Behind the scenes, we now know that Gene Wilder was suffering from the ravages of Alzheimer’s disease for the past three years.

I also learned today that Gene Wilder was bullied and sexually assaulted in school as a teenager.

As Hal Holbrook said in his book, “Harold,”

“An actor’s little gold mine is his secret nest of feelings, born of the way life has treated him and how he has chosen to respond to it.”

Holbrook, one of our finest American actors, had been beaten by his schoolmaster.

As an actor who has also performed comedy and as a boy who was bullied in school, I can understand the need to form connections and find joy inside to share our gifts with others on the outside.

In reading about him online today I learned some other things about Gene Wilder. His birth name was Jerome Silberman. He was a fellow veteran of the United States Army. His cancer was in full remission after treatment with chemotherapy and adult stem cells.

After his wife Gilda Radner died of ovarian cancer, he co-founded Gilda’s Club, which has the motto, “no one should face cancer alone.”

While it is easy to remember Gilda and imagine the fun that they had together, I was also reminded by many Twitter posts that he leaves behind his wife since 1991, Karen Boyer.

He left us with genuine humility and dignity, qualities that are often missing in a world today that is so filled with the latest gossip and rumors about people that have no impact on our lives at all.

Gene Wilder’s work formed a big part of my life’s journey, and I can’t remember a time when I didn’t recite lines from “Blazing Saddles” and “Young Frankenstein” from memory, or wish that I had a golden ticket to join Willy Wonka on a boat ride through his chocolate factory.

“Charlie: What was that we just went through?

Mrs. Teevee: Is that Japanese?

As the statement from his family said, “It is almost unbearable for us to contemplate our life without him.”

“A little nonsense now and then is relished by the wisest men.” – Willy Wonka