An article that my dad wrote about me and my Durand Bulldogs teammates in 1981. I am a little biased, but I think it is the best thing that he ever wrote.

I wonder if Will Rogers was speaking of himself in the quote above. He certainly gave a lot to the world. Through stage, screen, newspaper, radio, and countless personal appearances, he touched the world in a very special way in the early decades of the twentieth century.

I was introduced to Rogers in 1992
through the musical theatre. I attended a performance of the original Broadway production of, “The Will Rogers Follies: A Life in Revue” at The Palace Theatre in New York City. Mac Davis starred in the show when I saw it, and the role was originated by Keith Carradine.

It was my first Broadway show, so it will always hold a special place in my heart.

Over the span of three hours, I got to know Will Rogers, and was fascinated by his life story. He was a cowboy, a wild west show performer, star of the Ziegfeld Follies, and known throughout the world for his writing, movies, and timely social commentary.

My favorite part of the show was the ending. As Rogers sang the ballad, “Never Met a Man I Didn’t Like,” the faces of first one, then two, then five, then scores of all kinds of people appeared behind him on the translucent curtain.

“In all of my wanderin’, I’ve bumped into all kinds of people. Fancy cinema stars, fake evangelists, politicians, morticians. And I have reached the conclusion, while hiking the pike, though I try and I try, never once met a guy that I didn’t like.”

As the song came to an end, he slowly climbed the stairs. With his hand scratching his neck and his head cocked in an iconic pose, he disappeared into a tunnel of fog and light.

I saw a total of six productions of the show over the years, and whether Rogers was played by Davis, Carradine, Larry Gatlin, or a high school, college, or community theatre performer, the story of Will Rogers continued to inspire me.

And I planned to play him one day.

When I wrote the first version of this story in the spring of 1998, I had already learned to spin a rope, and was in final preparations for an audition that I hoped would take me into that tunnel of light to play Will Rogers. I wrote at that time:

“I have always thought that if one day if I got the chance to play the part of William Penn Adair Rogers, that I would find a special connection. I would try to portray Rogers true to life – not in a cartoon caricature as he is sometimes played.”

I was not cast as Will Rogers in that Dominion Stage production of, “The Will Rogers Follies” in 1998, but I did join the production as a member of the ensemble and spun my orange-tinted rope under black light.

In a Rockville Musical Theatre production in 2002 I also spun my rope in addition to playing Wiley Post.

I still wanted to play Will, and so I started thinking about putting together my own solo performance piece about him.

James Whitmore, one of our great American actors, had played Will Rogers for more than 30 years in, “Will Rogers’ U.S.A.” I saw him play Rogers three times before he retired the show in the year 2000 at Ford’s Theatre, and I really liked how he started the show as a narrator and transformed into Will Rogers in front of the audience.

In the fall of 2007, I wrote a letter to Mr. Whitmore, to see if the show was available to produce. A short time later I received a hand-written note from him connecting me with his producer, who gave us her blessing to produce the show.

Four and a half-years later, and after a lot of time spent condensing the script, preparing and acquiring the items that we needed and getting past a good amount of self-doubt on my part, my friend Trip Lloyd and I first appeared in the play at the Capital Fringe festival in the summer of 2012 through our nonprofit organization, Kaleidoscope Theatre Company.

As I write this updated piece today, I am finishing up a run of performances in a new production of, “Will Rogers’ U.S.A.” at The Little Theatre of Alexandria. We have had really nice audiences, and it has been wonderful to get back into the theatre and work with a great production team during these difficult times.

I have played Will Rogers 30 times since 2012. And I have enjoyed every minute of it.

I write this not to brag, as Will might say, but rather to relay that sometimes all it takes to get started with accomplishing a dream is to write a letter, buy a stamp and mail it.

I believe that the greatest thing about theatre is an actor’s opportunity to give something back to the audience, and 85 years after his death, Will Rogers continues to give me a lot of inspiration – through a tunnel of light.

My friend Frank Tavares died on December 30, 2019. As I write this I still can’t believe it.

Frank was one of my communication professors at Southern Connecticut State University.

During a fundamentals of professional presentations course that he taught, I decided to do a presentation about The Discovery Museum, where I worked as a planetarium lecturer and as a mission commander In our Challenger Learning Center.

No doubt inspired by that presentation, Frank wrote a story about me for my bachelor dinner in 1997. He couldn’t be there in person, so my brother Jason read it, to the enjoyment of my friends and family in attendance.

My wife Linda asked Frank to record it for her in his, “NPR voice.” In 2009 the recording arrived in the mail.

Frank has been off the air at NPR for a number of years, but I expect that many of you will recognize his voice.

I can think of no better way to illustrate what our friendship meant to me than to share this with you. Scroll to the bottom of this post to listen to it. 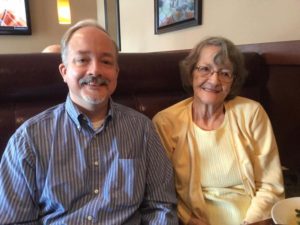