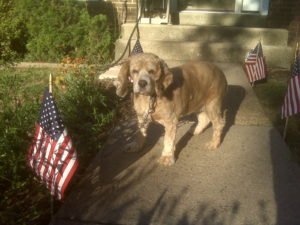 I met my puppy Wiley Post at the Arlington County Animal Shelter in September 2000. Of all the dogs in the cages waiting to be adopted she was the only one who was not barking. I put my hand against the wire of the cage and she leaned against it. When I took her outside to get acquainted she was more interested in looking for things that people had dropped on the ground than in hanging out with me, but that was okay.

We went back a few days later to adopt her, and my wife Linda asked if they could give her a bath. They said, “We already did.” She smelled pretty bad, so we helped them to give her another bath before we put her in the car. It didn’t help.

We took her to the groomer as soon as we could. When I went to pick her up I saw a dog on the groomer’s stand and asked about my dog. The groomer said, “This is your dog.” I hadn’t recognized her – she looked like a different dog.

Her name was Wiggles then and at three she wasn’t really a puppy but I liked to call her that. We changed her name to Wiley in honor of the pilot Wiley Post. At that time we already had cats named Gypsy Post, Emily Post, and Washington Post, and would later add Marjorie Merriweather Post and her kittens Parcel Post, Bani and Eliza.

Over the next few days there were a lot of adjustments in our house. Up until that point we only had cats. So we made sure that Wiley couldn’t get to the litter boxes and the cat food. It was an ongoing effort over the years.

Young Wiley hoping for a treat

Wiley was full of energy from the beginning and even though we did go to an obedience class, I never got trained very well. Or, maybe I did.

Wiley loved people, especially kids, and they loved her. And when we had theatre rehearsals in the living room she would watch with intense focus. She even appeared in the Christmas pageant at church one year.

When she was young Wiley would not sleep on the bed while we were home but when we came in the door we would hear a whump as she jumped off the bed and ran downstairs to meet us. And boy would she run up and down those stairs.

When she trotted along on her walks or in the back yard she had a kind of diagonal course. I often called her my diagonal dog.

There was nothing better than a greeting from a happy Cocker after a long day at the office.

Walking Wiley in the winter time was tough with all of the ice and snow, and I’ll admit I didn’t always want to get up and take her for a walk when I was tired. But she would come upstairs quietly and sit and stare at me until I woke up.

One day in the back yard on a very icy day a few years later I noticed that Wiley was lifting up one of her hind legs as she walked. We took her to the vet and it turned out that she had to have surgery to repair her cruciate ligament. The vet told us that it was likely that the other back leg would likely get weaker and require the same surgery. They were right. After each surgery Wiley had therapy on a treadmill in a water tank. She seemed to like it.

Wiley and her buddy Eliza

Wiley got her strength back in her legs but she could never jump on the bed again and she took the stairs slower. As she came down the stairs with more and more caution over the years, our cat Eliza Doolittle, Wiley’s buddy, stayed next to her and often slightly in front of her to slow her down. She often tried to cuddle up to Wiley and even though Wiley didn’t always reciprocate they were inseperable.

In her final year Wiley slowed down quite a bit. The walks were shorter, the naps were longer, and I thought about the earlier times of boundless energy and jumps off the bed and wished for their return. 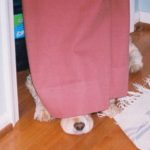 Wiley in her sweet spot

In her final weeks Wiley would be asleep in her favorite spot – the closet – when I came in the door. I let her sleep until she got up and then I greeted her. I missed the days when she would be at the door waiting for me before I even turned the key in the lock. As Wiley had greeted me enthusiastically when she was younger I would now greet her instead. And I carried her up and down the stairs until we decided it was best to move her bed to the main level of the house.

In the final days of August 2011 Wiley stopped eating. We don’t know why, but she clearly wasn’t feeling well. We tried everything – she wouldn’t even eat her treats or the special food that we bought. She wouldn’t even lick the peanut butter off my finger when I offered it or try to eat the cat food nearby.

I took her to my office on September 9 and introduced her around to the staff, wishing that there had been more days with her at my side. She was a good dog. We stopped by our regular groomer to see Wiley’s friend R.J. She quietly rested on the floor and drank some water that he offered. As he quietly pet her I was grateful for the care and friendship that he had given her over the years. She was often sad to leave. It was her second home.

That night I slept on the floor with Wiley, hoping to give her some of the comfort that she had given me over the years. I didn’t get much sleep, but she did.

The next day at the vet’s office we held her paw, and stroked her fur, and we told her that she was a good dog. I looked into her big beautiful eyes that so often had enticed me to give her a treat and said goodbye.

Many of the staff at the vet were crying along with us. They loved her too.

When we came in the door of the house without her it seemed so quiet – and empty. And it still does. It doesn’t hurt as much as it did, but we still miss her a lot. I think the most touching moment of that weekend was when we came back from the vet without Wiley and Eliza was looking for her friend all over the house.

Wiley taught me a lot of things.

She taught me to always ensure that the refrigerator door was closed all the way so that she couldn’t get into the food that was at dog height.

She taught me to not leave my backpack on the floor with my lunch in it.

She helped me to understand that sometimes we need to help each other to get up the stairs.

She taught me patience, and that it is good to take a walk–to just slow down and enjoy time with our friends because that time is finite.

Most of all she taught me how to be a friend – by just being one to me.

Recently I saw a magnet on the back of car in the shape of a dog’s paw, “Who rescued who?” 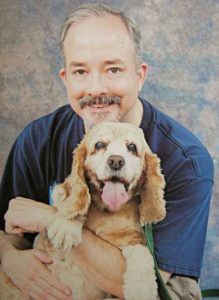